France to test travelers from 16 countries

New round of Syrian peace talks to be held in Geneva on Aug. 24

Fear of being forced to leave Switzerland is growing

Turkey is missing on a world map at Zurich airport. Just an oversight or is there more to it than that, which is why Turkey "disappears" from the map on the anniversary of the Treaty of Lausanne?

Zurich Airport informs travellers returning from a trip about quarantine obligations due to Covid-19. On large posters, the Health Department of the Canton of Zurich displays a world map with blue and yellow coloured areas. Turkey is not included on this map. It simply no longer exists.

Observers wonder whether this was an act of sabotage, since Kurdistan was divided and the assimilation of the Kurds sealed exactly 97 years ago at a conference in Lausanne, Switzerland. Is Turkey now to be “erased” as a late revenge?

In the meantime, the airport administration has responded to inquiries about Turkey’s whereabouts. Accordingly, an error occurred when coloring the countries in the graphic and the posters will be corrected. 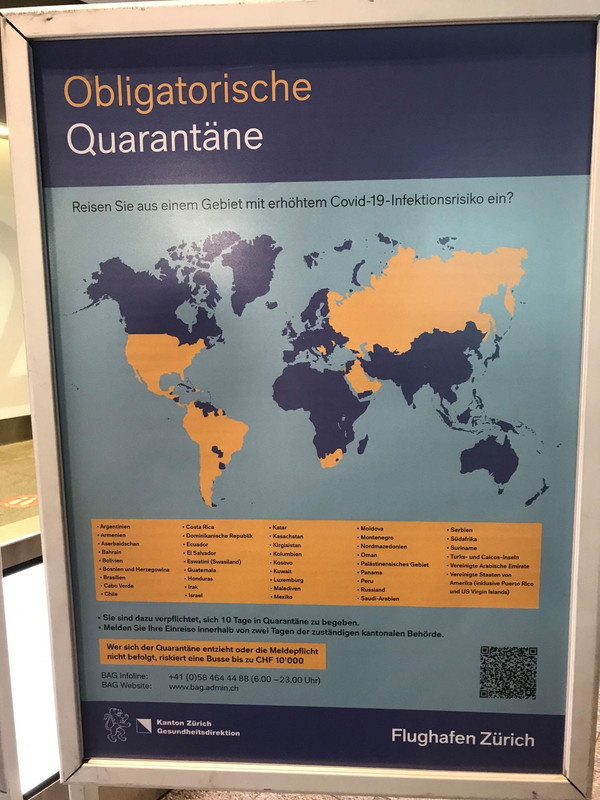 On July 24, 1923, the Treaty of Lausanne was signed at the Palais de Rumine between Turkey and the allies of the First World War Great Britain, France, Italy, Japan, Greece, Romania and the Kingdom of Serbs, Croats and Slovenes; the division of Kurdistan and the birth of today’s Turkey were sealed. With the stroke of a pen the Kurds became Turks, Iranians, Iraqis and Syrians. As it soon turned out, even the civil rights granted to them were only on paper. The governments of all four states actually pursued a policy of resettlement and expulsion, violent repression, Turkification and Arabization against the Kurdish minority. The venue for the negotiations was the Ouchy Castle in the district of the same name in Lausanne.

Angela Merkel’s government has called for more realism from the UK in the ongoing trade and security talks, after...

France to test travelers from 16 countries